Walls are Talking, The

This book narrates the harrowing and life-changing experiences of former abortion clinic workers, including those of the author, who once directed abortion services at a large Planned Parenthood clinic in Texas. These individuals, whose names have been changed to protect their identities, left their jobs in the abortion industry after experiencing a change of heart. They have come forward with their stories, not for fame or notoriety, but to shed light on the reality of abortion. They want their stories to change the lives of others for the better.

These stories are difficult to read, because an abortion is an act of violence, harming not only the obvious victim—the unborn child-- but also the mother, the father, the doctor, and everyone else involved. But these stories also offer hope, for they show that anyone, no matter what part the person has played in an abortion, can start anew, can make amends for past mistakes. They demonstrate that the first step on that journey is telling the truth, as these courageous individuals do in these pages.

"Those of us that have worked in the abortion industry all live with a constant burden. We can't let our burden slide off of our shoulders; it is what keeps us on fire. It reminds us of why we fight so hard. We have seen death and evil in a way that most haven't—and we participated. But we are forgiven. He who has been forgiven much, loves much. And we love a lot. I am eagerly awaiting the day when we can call all abortionists and clinic workers former and repentant abortion providers."

"Abby Johnson has done a phenomenal job of gathering the experiences of those who have worked in the abortion industry. The movement of grace that brings them out of the industry is profound. The wounds that they carry remind us that the abortion debate is not a moral and philosophical discussion, but a heart issue! The walking wounded are everywhere and, as Abby concludes, it is love and respect that heals the heart."

"In this riveting, compelling book, Abby Johnson tenderly holds out a loving hand of compassion to those millions of Americans who've participated in an abortion and takes a giant step toward healing our abortion-wounded nation."

"I've seen Abby's transformational story inspire people around the world, and I've witnessed the experiences of many other workers who are also now abandoning the abortion industry. Read and share the testimonies in this important book. It's time to let the world know what really goes on behind the closed doors of the abortion industry."

"This is such an important book right now. At a time when Planned Parenthood is under so much scrutiny and pressure, these stories of former abortion clinic workers could make a huge difference when it comes to shutting down abortion providers and ending abortion all together. "

"It is not a trivial thing to heed the call of one's conscience, especially when the cost is one's livelihood. I know. Years ago, I walked away from a Stanford Ph.D. and an academic position when I told the truth about forced abortions in China. The women in this book did the same thing. They walked away from the security of their jobs in the abortion industry when they realized the murderous truth about what actually goes on there. Read their stories, and pray that hundreds more abortion clinic workers will follow them out the door, with the last one turning out the lights as she leaves."

"The Walls Are Talking, and they're urging us to listen. The voices of Abby Johnson and other former abortion workers are loud and clear. Their real life accounts describing the inner workings of the abortion industry can no longer be ignored. And despite the stark madness of this gruesome environment, these stories of grace remind us that no one is beyond the reach of Christ."

— Ramona Trevino, Author, Redeemed by Grace: A Catholic Woman's Journey to Planned Parenthood and Back

"My friend, Abby Johnson, has been teaching us for several years what it means to leave the abortion industry and feel free of the murder, the heartache and the misery that accompany abortion.

Abby's latest book, The Walls Are Talking, is another remarkable journey down the path that she, and so many others, have travelled on their way out the torment of the abortion industry and into the light of truth.

I encourage everyone to read The Walls Are Talking and share it with family and friends. Heroic women like Abby inspire all of us." 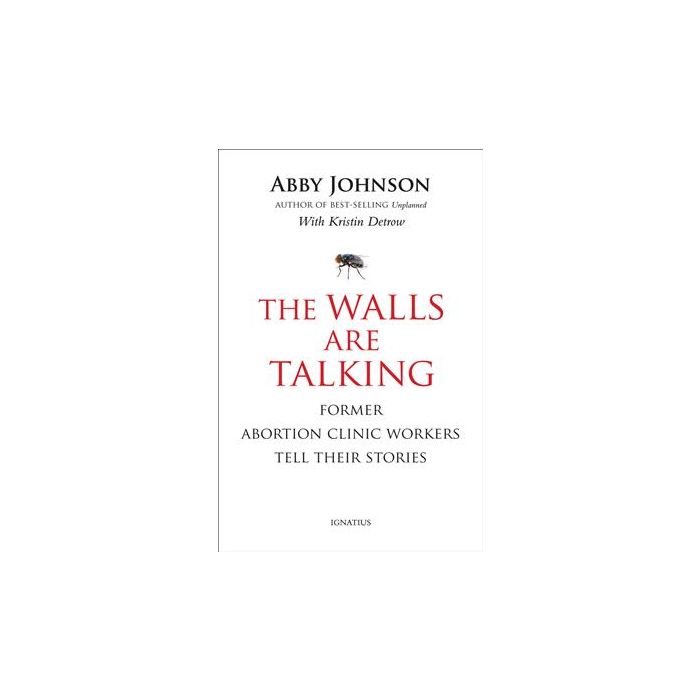