Something Other Than God

How I Passionately Sought Happiness and Accidentally Found It

Add to Compare
About the author
Jennifer Fulwiler told herself she was happy. Why wouldn't she be? She made good money as a programmer at a hot tech start-up, had just married a guy with a stack of Ivy League degrees, and lived in a twenty-first-floor condo where she could sip sauvignon blanc while watching the sun set behind the hills of Austin.
Raised in a happy, atheist home, Jennifer had the freedom to think for herself and play by her own rules. Yet a creeping darkness followed her all of her life. Finally, one winter night, it drove her to the edge of her balcony, making her ask once and for all why anything mattered. At that moment everything she knew and believed was shattered.
Asking the unflinching questions about life and death, good and evil, led Jennifer to Christianity, the religion she had reviled since she was an awkward, sceptical child growing up in the Bible Belt. Mortified by this turn of events, she hid her quest from everyone except her husband, concealing religious books in opaque bags as if they were porn and locking herself in public bathroom stalls to read the Bible.
Just when Jennifer had a profound epiphany that gave her the courage to convert, she was diagnosed with a life-threatening medical condition-and the only treatment was directly at odds with the doctrines of her new-found faith. Something Other Than God is a poignant, profound and often funny tale of one woman who set out to find the meaning of life and discovered that true happiness sometimes requires losing it all.
Jennifer Fulwiler is a programmer-turned-writer who chronicles her experiences of faith and family life on her popular blog, ConversionDiary.com. Her articles have also appeared in America, Our Sunday Visitor, Envoy and National Review Online. She has been a guest on the television shows Fox and Friends, Life on the Rock, and The Choices We Face, and and was also the subject of the reality show Minor Revisions. She and her husband, Joe, live in Austin, Texas, with their six young children.
About the book:
"This heartfelt book is a lovely account of a spiritual journey and a charming memoir. The author's epiphanies are wonderfully conveyed and will resonate with readers."
- Dean Koontz, #1 New York Times Bestselling Author
"Thought-provoking, honest, and often hilarious. It will strike a chord with anyone who ever posed --or tried unsuccessfully to avoid-- the big questions of life."
- Gretchen Rubin, New York Times bestselling author, The Happiness Project
"Fulwiler's story of finding God when you aren't looking for Him is a universal tale which will touch many hearts."
- Raymond Arroyo, Host of The World Over
"Touching, inspiring, provocative and, above all, real. Fulwiler's memoir shows us that while we're seeking God, He is seeking us even more."
- James Martin, SJ, author, The Jesuit Guide to (Almost) Everything
"A humorous, uplifting story about one woman's journey from lifelong unbelief to both faith and an intimate relationship with Jesus and His Church--Something Other Than God joins science, faith, and reason in an engrossing read."
- Cardinal Timothy Dolan, Archbishop of New York"
Jen Fulwiler is one smart cookie. Open to the movement of grace in her life, she submitted that extremely bright mind of hers to the God who made it and chose to use, rather than worship, her intellect in the search for truth. We are all the richer for it."
- Mark Shea, Author, By What Authority?: An Evangelical Discovers Catholic Tradition
"Countless men and women find themselves astonished, overwhelmed, and swept off their feet by God's ravishing grace, but rarely has anyone described the experience as honestly and compellingly as Jennifer Fulwiler has. This powerful conversion story deserves to be ranked alongside classics such as Augustine's Confessions and Newman's Apologia."
- Patrick Madrid, Host, "Right Here, Right Now" radio show
"Something Other Than God could have been called Indiana Fulwiler and the Quest for Truth. This is a personal conversion story that reads like an adventure novel one cannot put down. Trained by her scientist father to identify and uncover ancient treasures, our driven protagonist spends a lifetime on the hunt, engaging both heart and head as she tracks down first what is desirable, then what is meaningful, until, finally -- working her way through the clinging vines of conventions, the rolling hazards of memory and the brutal realities of suffering -- she locates a priceless and eternal prize that had always awaited her.
Intellectually satisfying, spiritually affirming and populated with peripheral characters that make you wish you knew them, too, Something Other Than God is an authentic and authentically entertaining must-read!"
- Elizabeth Scalia, Author, Strange Gods, Unmasking the Idols in Everyday Life and the blogger on Patheos known as The Anchoress
Skip to the end of the images gallery 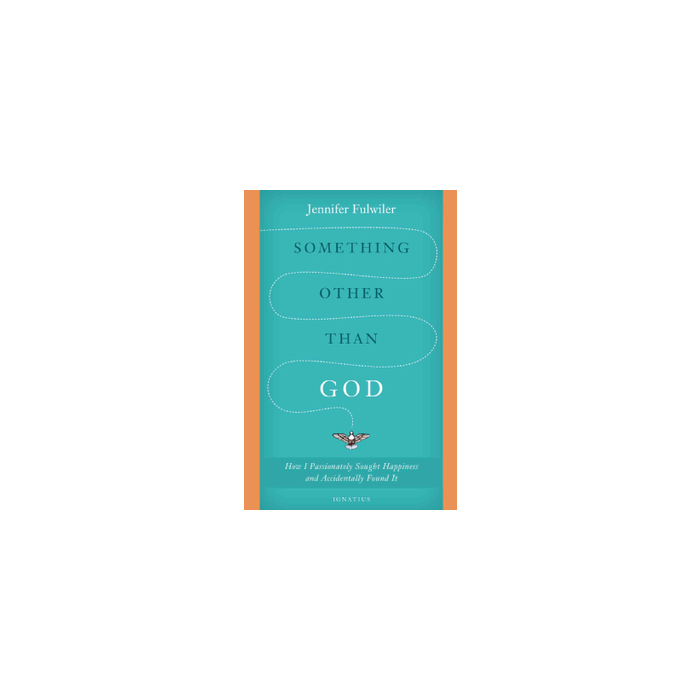